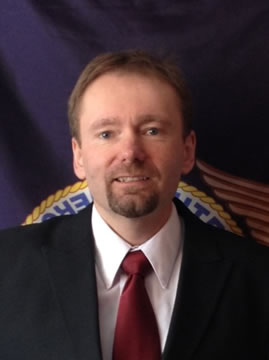 Captain Christopher Edyvean began his maritime career in 1992 after graduating from the Seafarer’s Harry Lundeberg School of Seamanship at Piney Point, MD. He earned his Able-Seaman rating in 1995 and continued to sail in both the Great Lakes and Deep Sea divisions of the Seafarers International Union until 2005. During this time frame, Edyvean worked on several military-contracted vessels in both peacetime and conflict; he received the Merchant Marine Expeditionary Award for sailing in support of Operations Iraqi Freedom and Enduring Freedom.

From 2006 until mid-2014, Edyvean worked as a licensed Deck Officer for Grand River Navigation on Great Lakes freighters and became a member of the International Organization of Masters, Mates, and Pilots. He quickly ascended the licensed ranks and served the last three of these years as Master. In mid-2014, Captain Edyvean began working as a ship pilot for Western Great Lakes Pilots Association, which provides pilotage service to foreign vessels entering Lakes Superior, Huron, Michigan, and the St. Mary’s River.

In addition to being an active mariner, Captain Edyvean has worked as a part-time instructor at the Maritime Institute of Technology and Graduate Studies at Baltimore, MD since 2009. He instructs an annual license advancement program and a pilotage familiarization course which are custom designed for Great Lakes seamen. He also assists with various STCW Basic Safety Training modules.

Captain Edyvean has studied extensively at many schools, most notably the Paul Hall Center for Maritime Training and Education, the Pacific Maritime Institute, and the Maritime Institute of Technology and Graduate Studies. He has also earned an Associate Degree in Fire Science from Columbia Southern University.

Captain Edyvean has been a member of American Merchant Marine Veterans (AMMV) since 2006 and is currently affiliated with Chicago’s Midwest Chapter. He was elected as AMMV National President to a two-year term beginning on July 1st, 2015. He is also an active member of the International Shipmasters’ Association, a group of Great Lakes maritime officers and industry associates.

In October 2015, Mr. Stéphane Ouellette, President and Chief Executive Officer, appointed Captain Edyvean to the Board of Honourary Governors.

American Merchant Marine Veterans, Inc. is a 501 (c) (19) non-profit group registered in the state of Florida. AMMV originated in 1984 with WWII mariner veterans who banded together to seek recognition for their heroic duties and sacrifices. In time, AMMV membership expanded to welcome family members and descendants of WWII mariners, and also mariners who served in other recognized post-WWII wars/conflicts. Today, membership is open to all U.S. mariners; associate membership opportunities are also available.

The foremost goal of AMMV is to educate people in the vital role in which the Merchant Marine has played during the history of the United States, and to seek recognition for the sacrifices and contributions made by the men and women who have served and continue to serve in times of both peace and war. AMMV works especially diligently to promote legislative issues pertaining to WWII era mariners. Through various local Chapters, AMMV actively participates in maritime memorial events and the maintenance of memorial monuments.

In order to help recruit a younger membership base, AMMV has resolved to support current issues which pertain to the modern day U.S. Merchant Marine, such as the Jones Act, cargo preference laws, the Maritime Security Program, the Ready Reserve Fleet, and the Military Sealift Command. AMMV agrees with U.S. maritime advocates that the United States must retain a pool of highly trained mariners and a fleet of U.S. registered vessels to be available to support our military in times of conflict.

AMMV has also voted to work with the Merchant Navy Commemorative Theme Project (MNCTP) to seek international recognition for all seamen who served in the Allied Merchant Navy and Merchant Marine during WWII.