On Remembrance Day, 2002, the radio drama “On Convoy” was broadcasted nationally on CBC Radio.

Written by Paul Ciufo, a playwright living in Grand Bend, Ontario, the play salutes the efforts of our merchant navy sailors, whose harrowing Second World War assignments of transporting soldiers, arms and supplies, through the tempestuous waters of the Atlantic and the Pacific, lead us to victory.

The play is further dedicated to the late John V. Webster who served in the British Merchant Navy and whose WW II experiences inspired Ciufo’s fictional play.

The drama is a coming-of-age story that focuses on Nathan Doyle, a young Canadian Great Lakes fisherman who joins the Merchant Navy in 1941.

As he embarks on his first North Atlantic crossing, Nathan is befriended by John More, a Cockney Englishman who boasts of surviving several ship sinkings. The third major character is an Irishman nicknamed Chippy who hates John and feels he will jinx their ship’s mission. “On Convoy” premiered as a stage play in 1999 at The Livery Theatre in Goderich, Ontario.

Please select On Convoy to listen to the actual Radio Production.

At the request of Stphane Ouellette, Executive Director, MNCTP, singer/songwriter Mike McInnis, from the Island of Cape Breton, Nova Scotia, wrote a song entitled Heres to the Merchant Navy.

In February 2005, Nathan MacDonald (right) released his video entitled Merchant Marine to a thunderous applause of celtic music fans at Barrymores, Ottawa. The song and video were written and produced to honour the valiant sacrifices and contributions made by the Merchant Navy during both Word Wars.

Nathan is a Cape Breton native, whose music is a blend of the Celtic sounds of Cape Breton and Newfoundland with a contemporary edge.

The success of this upbeat MN music video has been added to the overall track record of the MNCTP.

There were over a hundred Merchant Navy Veterans, not including their wives and other family members, dignitaries, and special guests.

Nathan performed his song Merchant Marine, and Stphane made a speech on the MNCTP scope, mission, and objectives to the CMNVA membership. Both the performance and the presentation were well received.

We were both honoured to finally have the opportunity to be among the heroes we so much admire, and for which the MNCTP carries on.

The Conference of Defence Association AGM (2004 to Present)

For several years, we have set-up an MN exhibit at the Conference of Defence Association (CDA) Annual General Meeting, at the Fairmont Chateau Laurier, to promote the Merchant Navy historical theme within the military community.

The CDA studies the problems of defence and security to promote the efficiency and well-being of the Canadian Forces. The CDA is the leading voice on those issues which have expanded to include national sovereignty, individual liberty and freedom, and developments around the world that affect the peace and security of Canada.

In November 2004, the MNCTP was contacted by staff from the municipality of Chelsea to set-up an exhibit at their library, and to have Merchant Navy Veterans provide on-site presentations of their wartime experiences.

This event was very well received, where presentations were made to youth groups ranging from eight to twelve years of age. The children displayed significant interest by asking several questions related to personal war experience. We expect to maintain and increase this type of activity to ensure that we reach larger youth target audiences. 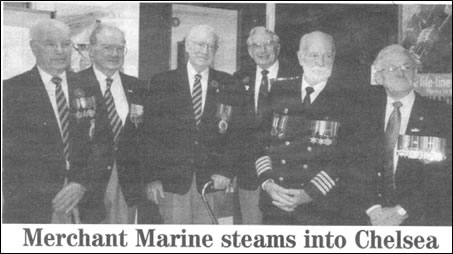