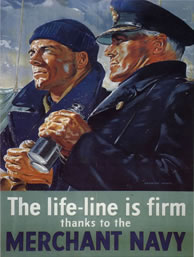 To create one of the most ambitious endeavors to recognize unsung heroes and heroines of Allied war history by 2020.

Our aim is to ensure:

Through the MNCTP, Canadians and Americans from sea-to-sea, and members of the international community will have another reason to appreciate the lives lost in naval combat, during the Great Wars of the twentieth century and beyond.

The MNCTP will mirror these actions by shedding light on areas of Canadian, American, and Allied War history that were previously overlooked.

Honour our Veterans of the Allied Merchant Navy and American Merchant Marine, recognize their sacrifices and contributions to our freedom, and safeguard its historical integration into the national and international mosaics of heritage and culture.