Message from the President and CEO 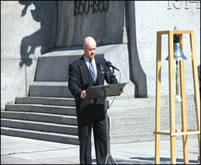 Over the last 20 years, I have had the honour and privilege of working with Veterans, the Canadian Forces, Parliamentarians, Members of the Legislative Assembly of Nova Scotia and the Municipality of the County of Cape Breton, various government officials, Members of the Diplomatic Corps, university students, musicians, videographers, the media, members of the general community, and more.

We all have shared a common interest, purpose, and vision in preserving and promoting the memories of our Veterans. The various projects that have been successfully undertaken over the last two decades, such as the preservation of the Sydney Harbour Fortifications, the publishing of an historical publication, the founding of the MNCTP, and organizing the Merchant Navy Veterans Day in Ottawa (every year since 2004), has been solely dedicated to honouring our greatest of citizens, whom have all made sacrifices, and many of whom have paid the ultimate price for our freedom.

During World I and World War II, many courageous men and women came together in a united front, fought for all of humanity under unthinkable conditions, and against unimaginable odds.

Now, we must rise to the challenge and create a new united front to preserve their memories, and the way of life for which so many perished.

Let us now stand united, without hesitation, and demonstrate our unwavering support to the remaining men and women of the Canadian and Allied Merchant Navies. No human being is beyond owing them their due recognition. Let Canada take a global lead, and show the world how seriously we take OUR FREEDOM, and that we are eternally grateful to our Veterans for ensuring its preservation.