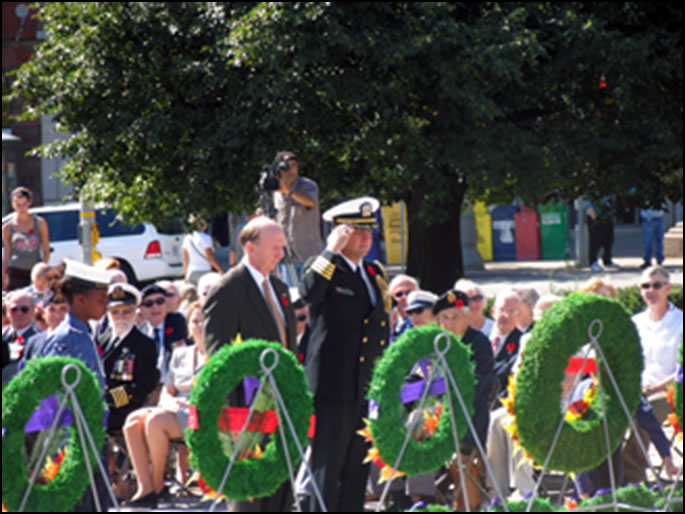 Today – Mr. Stéphane Ouellette, President and Chief Executive Officer, Merchant Navy Commemorative Theme Project (MNCTP), thanked the United States of America for over a decade of support excellence in acknowledging and commemorating the sacrifices and contributions made by Allied Merchant Navy and American Merchant Marine Veterans.

Mr. Ouellette also provided his best wishes to American Merchant Marine Veterans on their National Maritime Day that took place on May 22, 2016.

It was on the historic day of May 22, 1819, when the first American steamship the SS Savannah set sail from Savannah, Georgia to Liverpool, England. This was the first transoceanic voyage fueled by steam. National Maritime Day was created by the United States Congress on May 20, 1933.

“I would like to take this opportunity to express my heartfelt gratitude to the people of the United States of America for over a decade of support excellence to our Allied Merchant Navy and American Merchant Marine Veterans.”

“It was on Friday, September 2, 2005, when His Excellency David Wilkins (United States Ambassador) and Capt. John McClain (US Naval Attaché), along with other world representatives, attended the Merchant Navy Veterans Day event, and participated in our sacred wreath laying ceremony, at the National War Memorial in Ottawa.”

This was the first time in Canadian history that such levels of national and international recognition were achieved for our forgotten heroes of the Allied Merchant Navies, which has now grown to include the American Merchant Marine.

“We are especially pleased to be honored by our Canadian neighbors. Specifically, we thank the Merchant Navy Commemorative Theme Project for not only recognizing the U.S. Merchant Marine, but also for remembering the Merchant Navies from all Allied nations of WWII.”

The Merchant Navy Commemorative Theme Project (MNCTP) is a "Canadian driven" initiative dedicated to educating Canadians, Americans, and the international community about the sacrifices and contributions made by the Allied Merchant Navies and the American Merchant Marine as the mainstay of the Allied Forces victories in both World War I and World War II.

“Since the early days of the United States, the Merchant Marine has been the foundation of our economic security serving as our “fourth arm of defense” in both peace and war.  As the United States grew and US ships carried American innovation and craftsmanship around the globe, we have relied on Merchant Mariners to safeguard their travels.”

“They have been essential in bringing food to the world’s hungry and delivering supplies to our brave men and women overseas in times of war. They have done so much for the United States and on National Maritime Day we take this opportunity to honor their service and sacrifice.”

Critical to preserving our national and international mosaics of heritage and culture, the MNCTP aims to bridge the gap between the present day shipping industry and its glorious and predominantly forgotten past. In this way, one of the MNCTP’s strategic objectives is to integrate and promote the critical services provided by the “modern trade-and-travel-by-sea” community to international security and to the global economy.

“Maritime Day is a special holiday which recognizes the rich seafaring history of the United States.  Although our Merchant Marine has always played a crucial economic role, it is their wartime service that we most recall each year on May 22nd. The American Merchant Marine has been visible in every war and conflict dating back to the Revolutionary War and right up through the ongoing War on Terror.”

“However, it is the Greatest Generation of Merchant Mariners that deserve the spotlight. With unspeakable sacrifice and loss, the WWII MM built "steel bridges" across the oceans to deliver the war materials needed for the Allies to ultimately prevail; the war simply could not have been won without them. The bottom line: In peace and war, the United States Merchant Marine has always answered the call.”