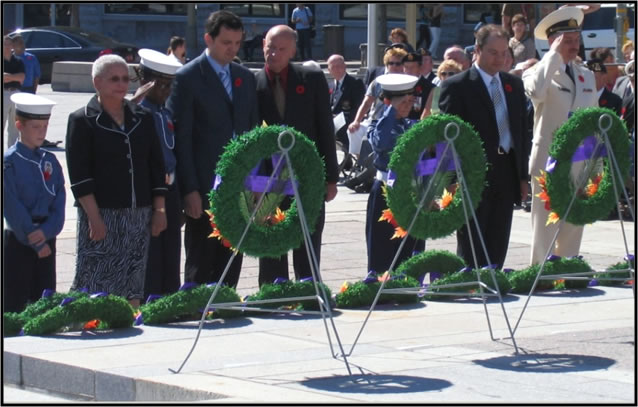 (From left: Her Excellency Shyamala Cowsik and other diplomatic corps attendees at the 2005 Merchant Navy Veterans Day of Remembrance located at the National War Memorial in Ottawa)

It was on the historic date of April 5, 1919, when the first Indian Vessel S.S. Loyalty sailed from Mumbai to London.

“I would like to take this opportunity to express my heartfelt gratitude for over a decade of support excellence that the Republic of India has provided to our Canadian and Allied Merchant Navy.”

“It was on Friday, September 2, 2005, when Her Excellency Shyamala Cowsik, along with other world representatives, attended the Merchant Navy Veterans Day event, and participated in our sacred wreath laying ceremony, at the National War Memorial in Ottawa.”

This was the first time in Canadian history that such levels of national and international recognition were achieved for our forgotten heroes of the Allied Merchant Navies, which has now grown to include the American Merchant Marine.

The Merchant Navy Commemorative Theme Project (MNCTP) is a "Canadian driven" initiative dedicated to educating Canadians and the international community about the sacrifices and contributions made by Allied Merchant Navies and the American Merchant Marine as the mainstay of the Allied Forces victories in both World War I and World War II.

Critical to preserving our national and international mosaics of heritage and culture, the MNCTP aims to bridge the gap between the present day shipping industry and its glorious and predominantly forgotten past.  In this way, one of the MNCTP’s strategic objectives is to educate Canadians and members of the international community on the vital contributions made by the modern trade-and-travel-by-sea to international security and to the global economy.

“Canada and India have longstanding bilateral relations that are built upon shared traditions of democracy, pluralism, and strong interpersonal connections. With an aim to empowering our two nations democratically, and with an Indian diaspora of more than one million across Canada, I am hoping that we will seize such opportunities to unite our people coast-to-coast, and overseas, through a common understanding of our history.”

For more information on the Canadian and Allied Merchant Navies, please visit: